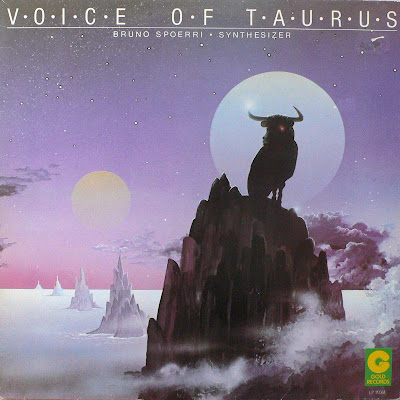 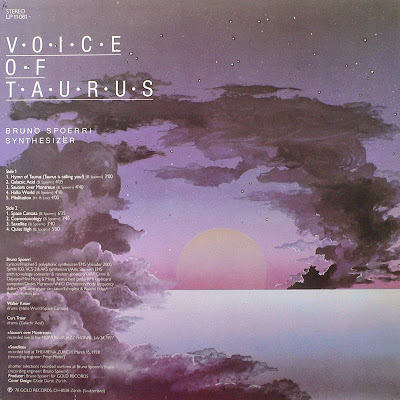 Still active Bruno Spoerri's "Voice of Taurus" has been recorded in 1978 for Gold records. Spoerri, using a whole lot of electronic devices, is accompanied by Walter Keiser and Curt Treier on Drums. Due to Finders Keepers 2006 release of Glückkugel the almighty Mr. Spoerri has received at least a little attention.
"Voice of Taurus" is my favourite Spoerri LP, although I have to admit that the live album "Sound of the Ufos" featuring Reto Weber has some "nice" moments as well. This one here is a pretty nice monster. You'd probably say: all killer no filler!
I say: Something for everyone! Humorous synth workouts alongside cosmic-disco-not-disco tracks.

hey basso,
your lp description has made me curious to give it a listen.
I hope a lot of people can ask for it in comments and enjoy it with you.

peace and thanks for your passion

oops, I think the link fell off the page?!

please post the link.. i'm very curious to hear this. unless i'm mistaken, did he also do something with irmin schmidt or holger czukay?
btw, great blog! thanx!

If you anonymous could type names right below your messages....
now I respond to anonymous 3.
you're right!
Irmin Schmidt & Bruno Spoerri recorded Toy Planet. If anyone has it.....

Looks heavy would love to hear it!

Enjoy one of the most beautiful parts of switzerland:
http://www.divshare.com/download/4413568-fcc

well,
I've just tried to upload irmin schmidt & bruno spoerri "toy planet 1981 lp".
I hope the link below will work good.
http://www.mediafire.com/?eqmlw94byoh
let me now if there are problems.
peace
ooops, I forgot:
thanks basso, that 1978 bruno lp you posted is wonderful!
strange cool electronic cosmic sounds, wow!
I think I am gonna play them at cosmicjazz parties or suggest it to baldelli dj!
another one in my ebay/shop wantlist to buy original.
good night

ahh.. yes that's right! thanx for the info. never heard that either..
-bcr.

this is a superb LP you uploaded.
Thanks so much!

Urs is a superdude and he would never provide anything but delicious cheese or lovely swiss electronic LPs,

i lust for the link. a dj that we interviewed lately for our blog on www.kosmonautenschule.blogspot.com had "hello world" in his current playlist. im really curious

PS How about exchanging links?

Hi Basso - thanks for the compliment!
There will be a reissue on CD by Inzec Records very soon!
Yours Bruno Spoerri

i will ry to promote the upcoming CD as much as I can. The download link will be deleted immediately and I'd be very happy about information of the release date....

Thanks so much for all this beautiful music,
Basso

Would love a reup here if possible, Basso... I've only stumbled onto your blog recently here... I've snatched up the albums from the links that are still working and am craving more......

The CD "Voice of Taurus" is finally available! Distributor is Godbrain, 3653 Oberhofen, Switzerland. Thank you for your interest and support!
Bruno Spoerri

Mr Bruno Spoerri seems like such a wonderful gentleman & am sure he would not mind you re-upping this. I have been told about this album for a long time but have never heard it and I am sure many of us would buy his re-releases once we have: OK not all of us would buy them but I am sure if its circulating in the blogsphere, there is more interest in general..well thats my philosophy anyway....

Now I gave my word I wouldn't continue give away mp3 copies of Mr. Spoerri's work for free. I gave it to a man whose work I adore. I think that's nuff said!

I finally got around to buying the Bruno Spoerri album "Voice Of Taurus" based on Basso's mouth-watering description and my cosmic gods, it is just so so so wonderful - many thanks to Basso & The Growing Bin for ensuring this kind of music does not stay down the memory hole and of course credit must go to the Inzec label for the reissue. I

It has such a timeless quality, so much so that I played a couple of tracks to some fellow cosmic disco heads and they were convinced it could not have been made any earlier than the mid to late 80s! and what makes it even more prescient is the fact some of the tracks were made much earlier than 1978 according to the sleeve notes!!

Actually it is worth reading the sleeve notes to check out how he created this music so here is some of the text lifted from Discogs:

Saucers Over Montreux: Improvisation, recorded live on July 24th, 1977, at the Jazz festival in Montreux – under the hot shining sun on the hot terrace, the ARP 2600 produced unusual and unique sounds… The improvised melody is played with the Lyricon.

Saxellite: Live recording during a Thearena concert in Zurich on March 15th, 1978: a saxophone improvisation with of EMS Pitch-to-Voltage Converter and the EMS the random generator as well as the EMS VCS-3.

Space Cantata: Here again the choir comes of course again from the VAKO Orchestron (a kind Mellotron with transparent discs). The solo is played (like most other solos) with the Lyricon I. „Close Encounters of the Third Kind“ gave me the idea for the song.

Quiet High: The theme actually originates from a film sound track, which I wrote for a horn quartet in 1967.

Cosmotoxology: The primal tape comes from the (improvised) tapes which I had already recorded with Ondes Martenot and „Live Looping“ (with 2 Revox reel-to-reel machines) in 1970. I only somewhat shortened it.

Thanks Man! I think I'll have to buy the reissue just for all the additional info...

Yeah the sleeve notes read like poetry in my mind! Have any of you guys ever come across his 1978 live album with Swiss percussionist Reto Weber called "The Sound Of The Ufos"? If so I would be interested in hearing your opinions on it.

The Crack In The Cosmic Egg crew raved about it and the titles alone make me delirious (Mr Spoerri if you ever read this can you tell me if the 'Swiss Encounter' track is about the Billy Meier case?)..check out the equipment he used!:

Less analog bubblebath and more analog tsunami! what a collection of kit! I don't even know what a 'Mu-Tron Bi-Phase' is or does but its possibly the best name for an object I have ever heard!

ps> forgot to say, thank you to Gianni for posting the link to the 1981 "Toy Planet" album he did with Can founder member Irmin Schmidt. Though it does not reach the dizzy cosmic heights of 'Voice Of Taurus' it definitely has its moments...

....the track "two dolphins go dancing" is a cosmic disco classic just waiting to appear on a Baldelli/Loda/Lovefingers compilation! Very surprised that no-one has done a re-edit of this track! Its definitely a re-edit waiting to happen (though the sax needs taming imo!)...maybe see it on a Blackdisco release one day! ;)

If you could also reupload this one, that would be fantastic and much appreciated.

you can buy the mp3s. I'm not going to spit into one of my heroes' face by illegally sharing mp3s of his music. hope you understand!