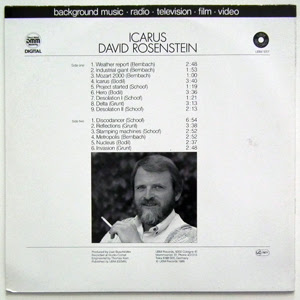 As far as I know there are 5 "interesting" libraries on UBM. Two of them posted here already and off we go with a third. Icarus by David Rosenstein. Mr Rosenstein is just another Ralph Haldenby, I suppose. Nobody else but Uwe Buschkötter and his crew... most of the tracks were written by famous german jazzman Manfred Schoof. And so the record is in fact a little jazzy. First track - Weather Report, if that doesn't give a direction? Well actually they're going many directions again on this one. Excellent Jazz Funk and Fusion is one of them, of course. But also some cosmic electronics and to my personal pleasure some ambient tunes as well. Check out Nucleus on the B-Side. Doesn't the synth sound exactly like on Skyracer? And don't you think that Icarus might be a sequel of Skyracer, thematically?
Nuff talk - time for a listen. Link in the comments.
Cheers, Basso
Posted by basso at 10:11 19 comments: 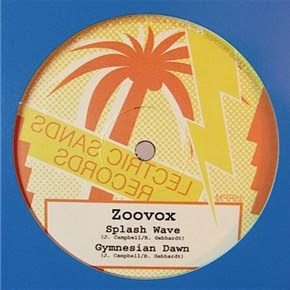 3 tracks that really killed me lately so I had to share with you here!
buy it the vinyl directly at the lectric sands website or get your link to mp3s there 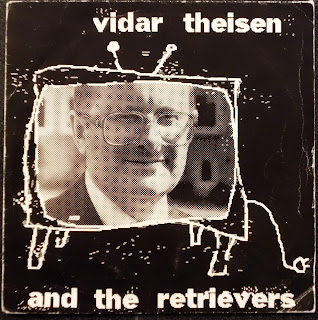 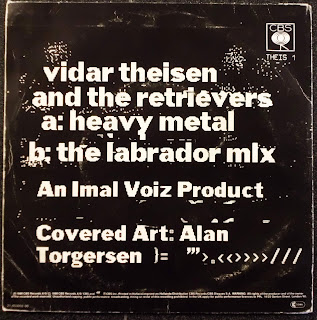 Norwegian cult weatherman, Vidar Theisen, passed away last month, so I figured it was time to give this battered 7" a spin to his memory. Behind the production is synthpopper, Espen Beranek Holm, who topped the Norwegian charts in '88 with this oddity. It's strange stuff if you don't understand Norwegian, I guess, but even stranger when you do. RIP Vidar Theisen.

Here's the man in action, back in the day..
http://www.youtube.com/watch?v=QLtwWVV9FHo

after listening to a really interesting, but not exceptionally exciting A Side, the B Side had a nice welcome gift........ WTF FOUR ..... basso going mental over it for months now....