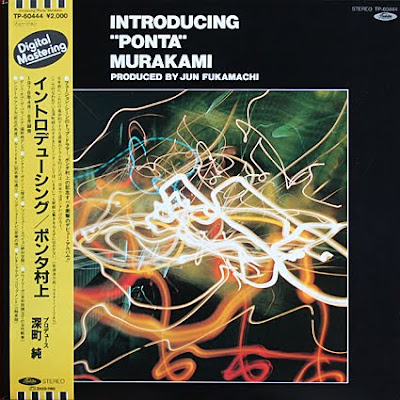 There's so much beautiful music coming from Japan and hardly known as the records almost never pop up over here in Europe. So I'm vere very happy that Jamie Tiller offered to contribute some of his fantastic finds from his trips to Japan. Thanks a lot, Jamie!! Is there anything you'd like to add?

"Well, they say never judge a book by it's cover.. but I say this rule is generally best ignored when it comes to digging records. Japan was proving to be a little different though and the sheer number of lousy records with amazing sleeves was getting disheartening. The cover of this one stood out though; the photograph they used looks like a journey home from a rather quiet night out might might look when all of a sudden you're beginning to think someone might have spiked your drink earlier in the evening. I flipped the sleeve around and I was instantly getting excited by the track titles.. 'Absolute Space', Symptom Angle', 'Triaxial Development'. I hate to admit it but when I saw the year '1976' my heart sank a little.. but still I couldn't resist running straight to the player to check it out. I knew from the moment 'Contact Point' came through the headphones though that Ponta San wasn't going to let anything get between him and the future! Enjoy."

EDIT. renamed, rezipped and reupped for your listening pleasure.... Enjoy!
Posted by basso at 08:51 12 comments: 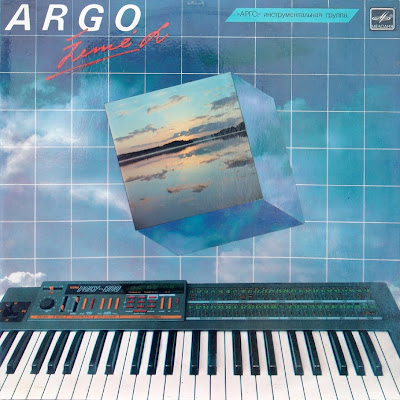 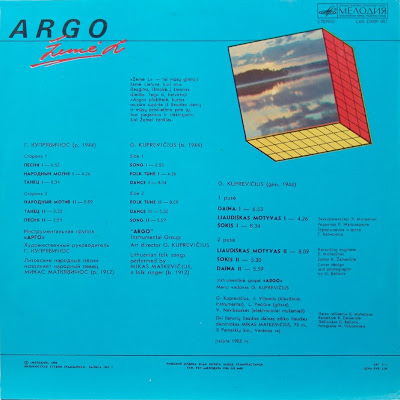 The last lp from Argo. Žemė L was released in 1985 and is much more experimental than Discophonia, their first lp. Synthesizers, guitar and electronic percussion. The vocal intro on the first track and the vocal outro on the last track were by Mikas Matkevičius who was 73 at the time of the recordings. 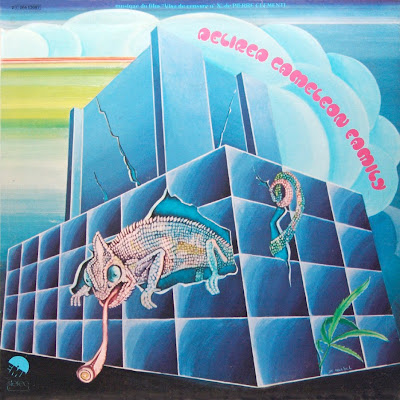 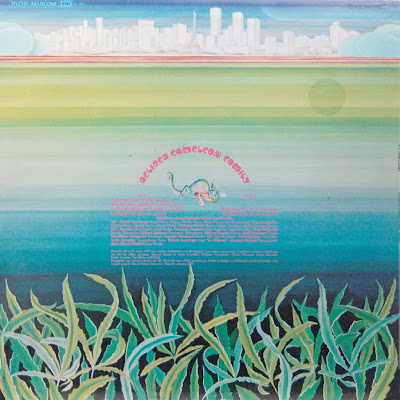 Cyrille Verdeaux and friends (Christian Boulé, Tim Blake, etc) formed this one-off group for the purpose of providing a soundtrack to an experimental psychedelic film by Pierre Clementi called Visa de Censure N° X. The music ranges from typical mid 70s psyche rock in the Cosmic Couriers vein to free psyche jazz experiments. This is the only lp in my collection with credits for Transgalactic Voice, Tortured and Backtracked Guitar, and Big Dry Beans (?).

Up, up to the sky 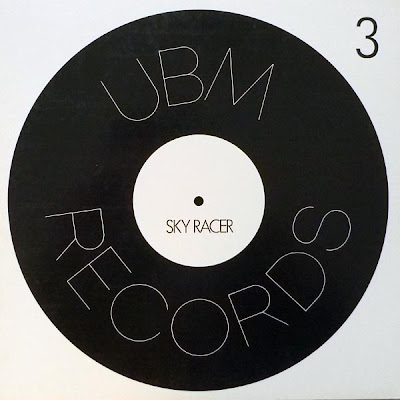 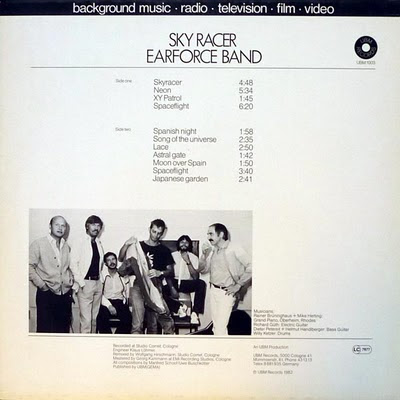 I still remember the day when I discovered this record that became my most admired library record for years. I was listening my way through a huge stack of libraries at my favourite record shop for hours. Among them a bunch of these UBM LPs that I never really saw before. I think there were about 10 of them and it was "hard work" as most of these were not at all my cup of tea. Skip, skip, skip. This one record here raised my interest because I read Manfred Schoof's name on the back as well as Rainer Brüninghaus whom I knew and admired for his keyboard work on some of Volker Kriegel's LPs. When the needle hit the groove the frustration (due to hours of only little listening pleasure) was gone immediately. Very nice! First track "Skyracer"- discoish jazz with a spatial feel... cool. "Neon" - yes, better than okay. And then the sweet "XY Patrol" totally hit me. I have a soft spot for that kind of drumming and my eyes really got wet from listening. Slightly ashamed I looked up to see if the shop-owner was aware of my intense feelings....phew! I think I heard it on repeat (1:45 is not enough) for a couple of times before I got into "Spaceflight". Man- This is it! Six and a half minutes of fantastic Spacedisco-jazz with emotional guitar solos and all that. I've never heard that kind of music on a library record before..... Months later at home I listened to the B-Side for the first time and really liked that too. No disco but beautiful melodies and a blissful spanish guitar. Enough words - have fun with this one! (link follows)
Cheers, Basso 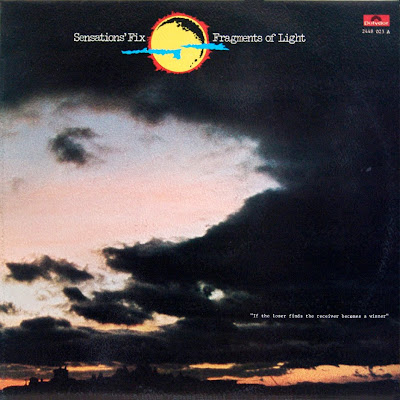 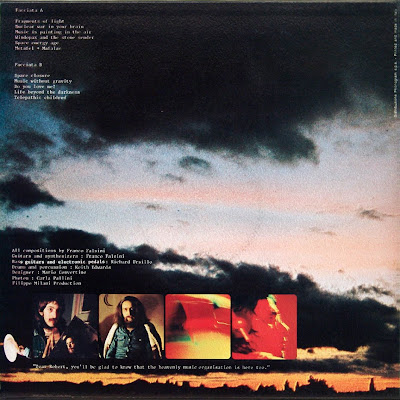 Franco Falsini created a masterpiece with this release. This was a trio effort but on some tracks he is playing solo, covering guitars and keyboards. There is not a bad track on this lp. 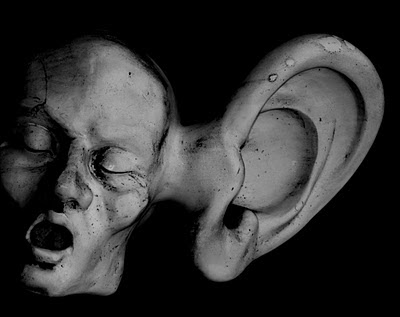 Dear friends of the bin,
have you heard Zeroy's amazing mix on Lovefingers yet?
Thanks for the beautiful music, Zeroy!
Posted by basso at 12:37 7 comments: 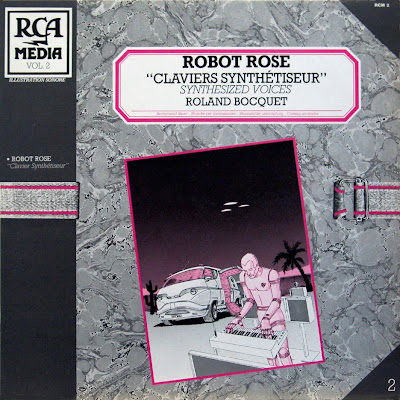 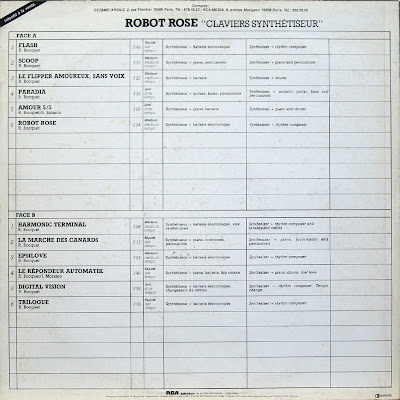 Roland Bocquet also known as the keyboard man in Catharsis, produced 4 solo lps between 1977 and 1983. This one is from '82 and was a production library work for RCA Media. He did a soundtrack the same year called "La Balance" and followed this lp with one called Robot Bleu in '83. He seems to have disappeared from the music scene after that one. Robot Rose is a showcase for synthesizer sounds. The lp begins with a disco track then progresses through synth pop and more soundtrack sounding pieces. The whole lp is a very enjoyable listen. 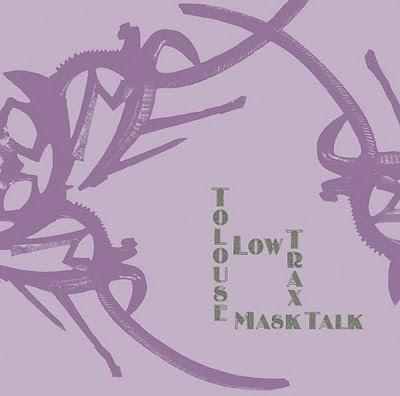 Please allow me to do some advertising! I really need to ...... because I was so damn blasted when hearing one the tracks of Tolouse Lowtrax aka Detlef Weinrich (of Kreidler fame) that I had to check out the whole thing on soundcloud. That lead to a whole working day of these tunes on repeat : ) What a sweet day. Lowtrax manages to combine the timeless beauty of minimal synth with afrodisco and some lovely kraut. The outcome is fantastic. And not only from the collector's point of view. (You'd have to buy a whole bunch of diffferent and probably all expensive early 80s LPs to get close to the quality of this release.) This is deep and danceable, pure and not pathetic and (enough of those stupid alliterations) a powerful contender for my album of the year. Go out and buy this as long as there are copies! 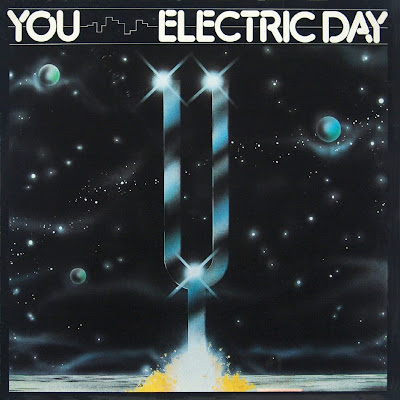 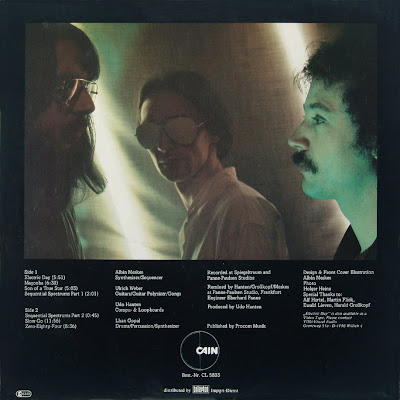 Electric Day was the first release from the band called You. It is also the only one which features a guitarist and drummer. Albin Meskes and Udo Hanten produced three more lps in the 80s as a duo. They are still performing as You at festivals. This is my favorite lp by the group; I like drums and guitar in the mix. Ulrich Weber played guitar on this lp and Lhan Gopal was the drummer. The main instrument on this and the lps to follow is the synthesizer. 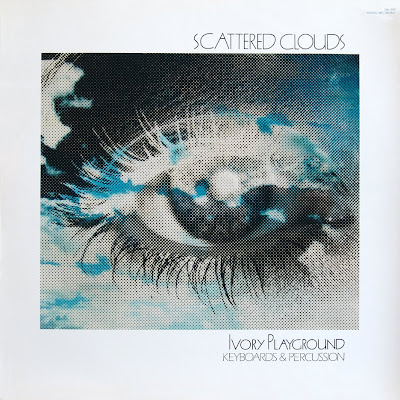 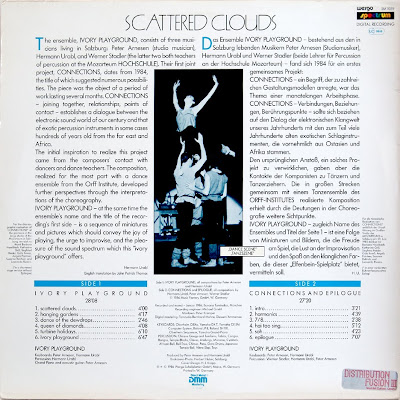 One multi-instrumentalist studio musician and two teachers of percussion who are also multi-instrumentalists = Ivory Playground. Their aim was to bring together the modern sounds of electronic keyboards with the ancient sounds of percussion instruments. This was accomplished with the collaboration of a dance ensemble from the Orff Institute in Salzburg. The music on this lp is relaxed and energizing and very satisfying. 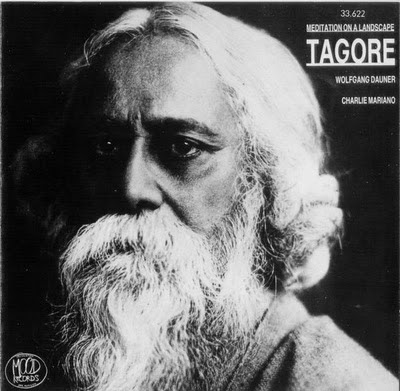 This record has been dwelling up in the shelf for more than 10 years without futher notice. Back in the days when I tried to find as much Dauner as possible (he's a genius) I also found this goodie, but I was more into Dauner's freaky LPs like Oimels or Output and so I probably wasn't listening to this here LP more than once. Just a little too relaxed for my imago of Mr. Dauner at that time (also I have avoided Charlie Mariano LPs back then ;). Times have changed and so has taste. For heaven's sake the record was still up there and to heaven the ears went when the record finally got some play and a patient listener. Don't know if this will appeal to the "masses" of downloaders, but if you can take some spiritual and calm music with indian influences, you're definitely not going wrong with this one.
Wolfgang Dauner and Charlie Mariano - Tagore.
Music from the film ICH WOLLTE SEIN EINE LANDSCHAFT
in rememberance of RABINDRANATH TAGORE.
A Film by Durga Shankar Ghosh, produced by SDR T.V. Stuttgart.
Cheers!