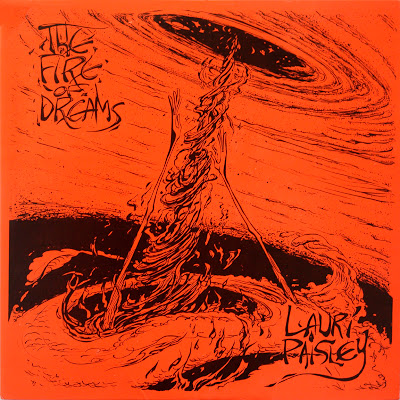 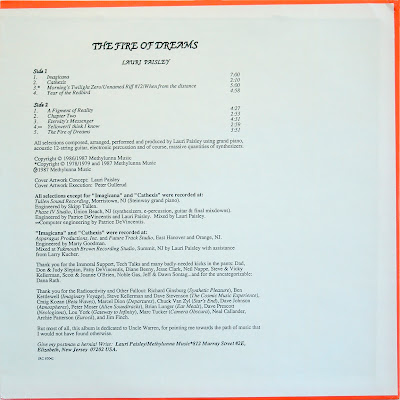 Lauri Paisley - The Fire of Dreams

Another private release, this time on Methylunna Music. Lauri Paisley was a solo artist and as far as I can find, this is her only release. Lauri plays grand piano, 12-String guitar, electronic percussion, and "massive quantities of synthesizers". Some of the tracks have a classical feel while others, particularly on the b side, border on synthpop, The album was released in 1987.

Fantasic! Thanks! (insert picture of me kissing my fingertips)

my mouth waters from your description........

Nope, not her only recording. I have in my possession her cassette album "Skywords" on Methylunna music #6.3 from 1985/86. Neil Nappe assisted. Richard Ginsburg of WFMU back in the day played both Lauri and Neils stuff on his show Synthetic Pleasure. Lauri has seemingly disappeared from contact, at least from an Internet perspective. Look here for an article from 1986!
http://thekeep.0catch.com/night/niterev7.htm

Ooh! Been wanting to listen to this full album since it appeared on my *ahem* 'private synth saved search a couple of weeks ago. Thanks!

she also has a cassette she did with don slepian called "uncontrolled voltage" which is excellent. its from 1980-ish i think

Lauri passed away in 2013 from breast cancer